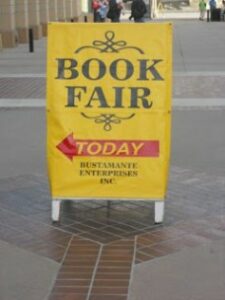 Book fairs and festivals offer authors an excellent place to interact with fellow authors and publishers, network with book industry leaders, locate the help you need, such as a publicist or book editor, and learn what’s new in the marketplace.

Book fairs usually want speakers. By volunteering to speak, the author not only gains great exposure but can also add that appearance to their resume and press releases. One of my author clients was recently a member of a panel of authors at a Southern Book Festival. I issued a press release about it and added it to her accomplishments on her bio. Not only is she a respected author but she’s now an author admired by her peers. It’s these little things that all add up in the minds of reviewers and the media when they decide who they will write about. If you want to land a panel gig or speaking slot you must plan ahead; dates for panel participants, speakers and autograph sessions are usually arranged months in advance.

Here’s my list of upcoming book fairs and events that are worthy of your attendance in 2013.

The Rocky Mountain Book and Paper Fair will begin August 2, 2013 and finish August 3, 2013 in Denver, Colorado.

The Brooklyn Book Festival will begin September 6, 2013 and run through September 22, 2013 in Brooklyn, New York.

The Bookmarks Festival of Books will be held in Winston-Salem, North Carolina on September 7, 2013.

The Kansas Book Festival will be in Topeka, Kansas on September 7, 2013.

The Westchester Multicultural Children’s Book Festival will be September 14, 2013 in Westchester, New York.

The National Book Festival will take place in Washington, DC from September 21, 2013 through September 22, 2013.

The Baltimore Book Festival will begin in Baltimore, Maryland on September 27, 2013 and end September 29, 2013.

The Southern Festival of Books in Nashville, Tennessee will run from October 11, 2013 through October 13, 2013.

The Miami Book Fair International will kick off in Miami, Florida on November 17, 2013 and wrap up November 24, 2013.
The bottom line: Make it a priority to visit a book fair in the coming weeks and months. You’ll be glad you did!