How Amanda Hocking REALLY Did It – An Inspiration for All Authors

Amanda Hocking, as I’m sure you know, is a best-selling e-author on Amazon.com. Since uploading her first e-book in the spring of 2010, she has grossed about $2 million. She’s got 10 novels under her belt, all of which fall into the paranormal-romance category. The prominent entertainment company, Media Rights Capital, optioned her four-book vampire series “Trylle”.

Clearly, she’s had great success self-publishing her e-books. So, it was a surprise when Hocking decided to sign with St. Martin’s Press, which is a very established publishing house.

Hocking has openly explained that she suffered from depression for the vast majority of her life and turned to writing as a sort of escape. She finished her first novel at 17, titled “Dreams I Can’t Remember” and was turned down by each of the 50 agents to whom she’d sent her work. Not long thereafter, she caught a clip on YouTube of the band Blink-182’s Mark Hoppus encouraging American youth to make their dreams come true. Hocking admits having a sort of “aha” moment and realized that she could not wait for her dreams to come true. She had to put forth the effort and make them come true.

In 2009, Hocking began to treat writing as a job rather than something she did for entertainment. She wrote a few more novels, sent them off to agents, and still received only rejections. In April 2010, Hocking uploaded her novel “My Blood Approves” to Amazon, then later to Smashwords, then directly on Barnes & Noble’s site. Hocking started selling books, first a few a day, then as she uploaded more of her work, she managed to sell 26 books in one day in May. These days, the author is selling 9,000 books a day.

Just how did she do it? Well, the stories she writes are an obvious piece of her success. Her novels combine action and romance with a dash of quirk and topped off by Hocking’s creative style of writing. Additionally, by selling e-books, Hocking was able to sell the books for far less money compared to a traditional bookstore book. Therefore, people were more inclined to spend the 99 cents or $3.00 to read her work instead of dropping upwards of $15.00 for a book off the shelf of a trendy bookstore. Hocking has a very blasé attitude in regard to her success and rapid writing. When asked just how she manages to complete her work so quickly, Hocking responds on her blog, “I don’t know. I just write a lot and drink a lot of Red Bull.”

Hocking also suggests that writing paired with reading more than she writes, was instrumental in her success. She made sure to edit her novels a great deal in order to get them just right. Learning to take criticism was useful to Hocking’s success because she was able to understand that although her books weren’t for everyone, they did have an audience.

Taking a look at her blog, Hocking describes herself as an, “Obsessive tweeter. John Hughes mourner. Batman devotee. Muppet activist. Unicorn enthusiast. Fraggin Aardvarks guitarist. Author of the USA Today Bestselling Trylle Trilogy & the upcoming Watersong series.” She actively updates her blog, so her fans always have something new to read. This past October was Hocking’s second annual “Zombiepalooza!” on her blog, which ran for the entire month of October. Hocking explains that while she especially enjoys zombies, Zombiepalooza is really a celebration of all things horror and Halloween. Throughout the month, there were guest posts, giveaways, and other fun goodies, such as the “ultimate Halloween Playlist.”

John Kremer recently mentioned Amanda Hocking in a seminar about blog tours. Amanda Hocking inspired him to name a particular type of blog tour a Blogpalooza. John got the name from Hocking, after her first Zombiepalooza in October 2010. In his seminar, John also explained a few of Amanda’s stats, which were affected dramatically by Zombiepalooza. Before Zombiepalooza, Amanda had been selling about 3,000-5,000 copies of Kindle eBooks each month. She sold about 20,000 total before October 2010. In December 2010, after Zombiepalooza, she sold 100,000 copies in the month of December alone. In January, she sold 450,000 copies of her Kindle eBook novels.

In February of 2011, she made the USA Today best-seller list. By the end of February, she had sold 900,000 copies of self-published Kindle eBooks. In March 2011, her book sales totaled over 1 million copies, and she subsequently sold the rights to four of her books to St. Martin’s Press for $2 million. Some were surprised by her decision to sell her book rights, but Hocking has explained that in order to be a billion-dollar author, she needs people to buy her books at Wal-Mart. In order to get her books onto shelves, she had to partner with St. Martin’s Press.

Says Hocking, “I’m a writer. I want to be a writer. I do not want to spend 40 hours a week handling emails, formatting covers, finding editors, etc. Right now, being me is a full time corporation. I am spending so much time on things that are not writing.”

“I like writing. I even like marketing, especially when it comes to interacting with readers. And I don’t mind editing. I just don’t want to run my corporation, because that takes away from writing and everything else that I actually enjoy doing,” concludes Hocking.

After gaining so much success, Amanda has been able to seize unique opportunities. For example, she was a featured speaker at Comic Con in San Diego. Additionally, she was able to buy a life-size Han Solo figure from Star Wars, which was encased in carbonite. The life-size figure is rare and was something Hocking had her eye on for quite some time. The unique purchase was due in great part to the success of her Zombiepalooza.

The way Hocking executed Zombiepalooza is what earned her such success. She invited people to guest-post on her website, offer free copies of their books, and contribute stories to her blog. Simply put, she asked people to come to her blog and blog. Those guest bloggers, in turn, brought their fan clubs to Amanda’s website, earning Amanda’s work more exposure and causing her to gain even more fans. Zombiepalooza was an event blog tour that really got people talking and excited about the event, making it extremely effective.

In addition to her own blog, Hocking has separate blogs for her book Virtue, My Blood Approves, The Hollows series, as well as a blog dedicated to soundtracks for her various books. Hocking follows dozens of blogs herself. Having been blogging since April 2009, Hocking has had nearly 2 million page views. Check out Amanda’s blog to learn more about her, her work, and to see release dates of her upcoming books at AmandaHocking.blogspot.com or her Facebook fan page.

The bottom line: Amanda Hocking is an incredibly talented author. She has achieved great success in her career, largely due to marketing her novels so effectively. Amanda began writing e-books and now has a multimillion dollar book deal. Her talent for both writing and knowing how to market her books has enabled her to become a wildly successful author. Amanda Hocking has helped pave the way for authors to follow in her footsteps without the traditional ‘gatekeepers’ of publishing being involved.

‘Become a Real Self Publisher’ by Michael N. Marcus is a Must Read For First Time Authors or New York Times Bestselling Authors 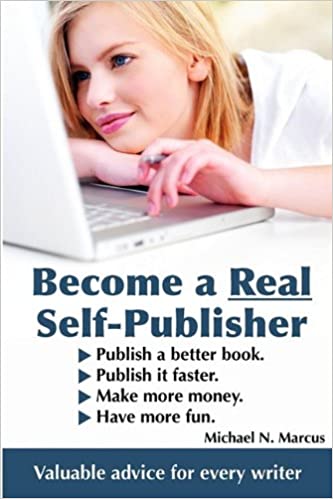 ‘Become a Real Self Publisher’ by Michael N. Marcus

If you want the roadmap on how to become a successful author and publisher then “Become a Real Self-Publisher” by Michael N. Marcus is the book for you. In a pull-no-punches style Marcus cuts to the chase in the often confusing and treacherous book publishing and book marketing game.

As a writer and successful publisher of books for more than 30 years Marcus speaks from personal experience. He implores authors to become real publishers and not customers of vanity presses or companies that publish on demand which Marcus says does not exist. Why? Nobody publishes on demand; they “print” on demand, he says.

Marcus compares and contrasts publishing options including: LULU, Outskirts Press, Infinity Publishing, Amazon, Author House, Book Surge, Xlibris, Lightening Source and traditional publishing in a “no-holds- barred” approach. I find his approach refreshing because so many authors I speak to as a book publicist really need someone like Marcus, who has no hidden agenda, to tell it like it is.

Besides discussing the benefits and pitfalls about every type of publishing option in the marketplace, Marcus also offers tips on what to do if you get a bad review. Says Marcus, “Don’t let a bad review ruin your day or your life. Some reviewers have hidden agendas like working on a competing book.” Marcus points out that it is rare that 100% of a review is bad and that there are usually a few sentences that can be pulled for the purpose of helping you sell more books.

“Become a Real Self-Publisher” also includes a list of publishing terms authors need to know about such as: ARC (advance reader copy) and POD (print on demand ) …as well as places authors don’t want to see like the Slush Pile which is that place where unsolicited manuscripts end up awaiting an evaluation by a publisher or agent.

“Become a Real Self-Publisher” by Michael N. Marcus is a must read for all authors whether they are first time authors or on the New York Times bestseller list. It’s written in a serious but entertaining style with a little humor tossed in. I highly recommend it.

Another book marketing resource for authors is my friend Dave Chesson who has created a step-by-step process. I highly recommend you check out his article about the topic. Then get back to me when you are ready begin your book marketing journey. https://kindlepreneur.com/book-marketing-101