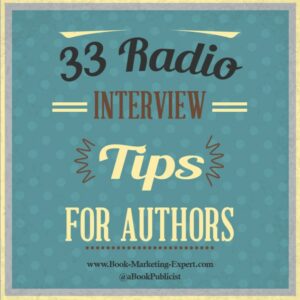 You’ve landed the radio interview and it’s time to get ready to actually do it. Now what? As a book marketing expert and book publicist, I have booked my clients on thousands of radio interviews. Here’s a list of tips I give to my clients prior to their interviews. Keep this helpful list of interview tips nearby and you’ll be glad you did!

As a book marketing firm, we’ll prepare our clients with media coaching or if need be training with a media trainer. We’ll also submit questions to the radio host ahead of time and include those in our press kits emailed to the stations. Often the radio host will read those questions right in order. Other times they refer to our questions and include some of them. We do this to help the host in case they’ve not had a chance to read the book, and to help direct the questioning.

Make sure you know your own material inside and out and are comfortable with everything in it. You are the author of the book, or the press release and they’ll ask you, “What did you mean about this or that?” You need to have the answer. You don’t want any surprises.
The Bottom Line:  RELAX, you’ll do fine. The butterflies you’re feeling are what will drive you to do your best! Just follow these helpful tips and you’ll be a radio interview star!

Learn more about Westwind Communications’ book marketing approach at http://www.book-marketing-expert.com  or contact Lorenz at scottlorenz@westwindcos.com or by phone at 734-667-2090. Follow Lorenz on Twitter @aBookPublicist Check his blog at: http://www.The-Book-Publicist.com

How Rachael Ray’s TV Career Started With Her Book 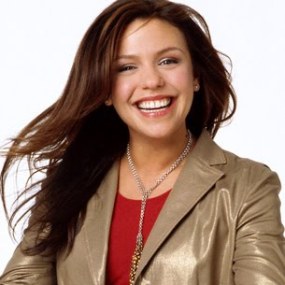 Rachael Ray heads an empire that includes hit TV shows, best selling books, a magazine and her own product lines. Things keep getting better and better for Rachael Ray. But, you might be interested to know that it was a couple of radio interviews about her book that propelled her to fame and fortune.

As a book publicist I talk to authors and clients every day and every so often one says, “Oh I really don’t want to do radio” or I’ll have a client who’ll decline a radio or TV interview and then give me reasons like “There’s only 5,000 people tuning in to that station, or such and such is a small town, or nobody listens to radio at 2AM,” or whatever. I usually respond with “If the Rotary Club in your home town called you today and invited you to speak to their club and 450 people would be in the audience, would you go?” The answer is always a resounding “YES! I’d love to do that…” What’s the difference? Perhaps it’s perception. If you can see them, 450 people are a lot of folks. If you can’t see them it’s too small. How about 5,000 people? But, it’s not always the quantity of listeners it’s the quality of that listening audience.

Let me tell you, radio makes stars, radio interviews get people on TV, radio gets people on Oprah.

That brings me to the story of Rachael Ray and her big break in 2001. She had already sold 10,000 of her cookbooks and she had her own TV segment on WRGB, the local CBS affiliate in Albany, New York. Jennifer Pullinger, the publicist at National Book Network assigned to work on two of her books, Comfort Foods and Veggie Meals, had booked her on various radio shows for phone interviews as part of the publicity campaign. After booking Ray on a handful of small-market radio shows, Pullinger utilized one of Ray’s contacts at WAMC in Albany, New York and scheduled her for a cooking demo on Northeast Public Radio’s “Vox Pop.” The host, Joe Donahue, had had Ray on his program before and happily booked her again. Ray did her demo, and of course, listeners loved it.

And, guess who was listening to that station? Someone who knew the Food Network’s VP of Programming, Bob Tuschman. That “influential” person heard Ray’s segment, and told Tuschman about her. Tuschman then called Pullinger to arrange a meeting with Ray and the rest is history. Oh, and who was listening to another of Rachael Ray’s radio interviews while on his vacation? Al Roker, the weatherman from the Today Show. Al told the show’s food producer to check her out. The producer called Pullinger and booked Ray for a live cooking segment with Al on the Today Show. She was a hit. Then after a couple of years on the Food Network she got THE BIG CALL from Oprah which led to her daily nationally syndicated TV show.

Her big break(s) can be traced back to radio interviews and the groundwork laid by her publicist Jennifer Pullinger, who had previously shipped tapes of Rachael on WRGB-TV to the Food Network and all the morning shows. Think about it. A major star’s career was born from a radio interview, and one that happened at the last minute, and one she nearly turned down. PR opened the door for Rachael Ray and it can do that for you too. Putting a value on that is hard to do but, I’d have to say it’s priceless.

I am often called by producers who want a guest at the last minute. I always deliver them a guest and since I just helped them out of a jam they remember it.

The Bottom Line: Radio works. Small market TV works too, both are a great medium to promote your book. If you get a broadcast opportunity, take it… even if you have to drive three hours across the desert to get there!

You never know who’ll be listening.

The Book Publicist | Book publicist Scott Lorenz and his thoughts on the book marketing industry.

About Scott Lorenz
Book publicist Scott Lorenz is President of Westwind Communications, a public relations and marketing firm that has a special knack for working with authors to help them get all the publicity they deserve and more. Lorenz works with bestselling authors and self-published authors promoting all types of books, whether it’s their first book or their 15th book. He’s handled publicity for books by CEOs, Navy SEALS, Homemakers, Fitness Gurus, Doctors, Lawyers and Adventurers. His clients have been featured by Good Morning America, FOX & Friends, CNN, ABC Nightly News, The New York Times, Nightline, TIME, PBS, Los Angeles Times, USA Today, Washington Post, Family Circle, Woman’s World, & Howard Stern to name a few.
Learn more about Westwind Communications’ book marketing approach at http://www.book-marketing-expert.com  or contact Lorenz at scottlorenz@westwindcos.com or by phone at 734-667-2090734-667-2090. Follow Lorenz on Twitter @aBookPublicist